Review of Depth of Deception

In 1982 a young woman, dressed in Edwardian clothing, is found floating unconscious in the North Atlantic with a 1912 boarding pass to the HMS Titanic.

Miraculously the mysterious young woman awakes in a Manhattan hospital with no memory of who she is.

Edward Hoffman, respected, wealthy and a Titanic survivor himself, assists in exposing her as a fake, but the plan backfires and stirs up more details in the woman’s memory. Is it a bizarre case of time-travel or an elaborate hoax?

Depth of Deception begins with a SOS coming from the frigid waters of the North Atlantic. Captain Sadler of the HMS McKinley, and crew, search the cold water and grow irate as they discover no ship in distress. Then the cry comes, “Man overboard. Man overboard. Off the starboard bow.”

But in this case, it’s woman overboard.

Floating in a deck chair and a Teddy Bear clenched in one hand and a copy of the novel, Futility, in the other, the women wears an Edwardian dress and a gold locket inscribed with, To Myra, Happy Anniversary! Archie, December 31st.

On further inspection of the book, a slip of paper is discovered marking a page. The book mark turns out to be a Cabin Passenger’s Contract ticket, from the HMS Titanic. Miraculously, the woman, Myra, is alive.

In England, Callium Toughhill works as a freelance insurance investigator. He is surprised when, Percy Winthrope, hires him to look into a missing broach stolen from the murdered Agatha Gilcrest. The broach was said to have been on the Titanic and with the salvage rights recently granted, Lloyds of London wants to know if indeed the broach is there. Otto Slade was arrested for the murder and convicted, but the more Callium Toughhill discovers, the more he comes to doubt Slade’s guilt.

Toughhill’s investigation interlinks with the rescued young woman in more than one dangerous twist. It becomes clear there are those who do not want Agatha Gilcrest’s murder looked deeper into, and they will do anything to stop Toughhill’s digging.

When Myra wakes, she has no memory of who she is, but is clearly terrified of the world around her. She is moved to a private hospital. Her psychiatrist, Dr. Natalie Lindsay, contacts Edward Hoffman, who as a child, survived the sinking of the Titanic, and has become a expert on all things Titanic. She contacts him and they come up with plan to expose the mystery woman as a fake. Their plan backfires and brings a discovery that shakes Edward Hoffman to his core.

About the Author: Alexander Galant was the historical researcher for the novel DRACULA THE UN-DEAD, which was on the New York Times Best Sellers list in October 2009. Alexander also co-wrote the screenplay adaptation that was optioned briefly by Jan de Bont and adapted the novel into a dramatic stage reading for the Toronto book launch of Dracula the Un-Dead, which brought out the highest turnout for any event on the book tour. 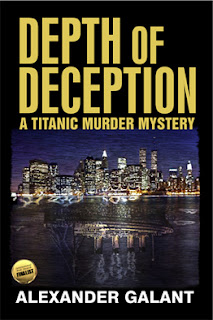 I always interested in what my visitors are thinking.

Leave a note and let me know.

Barbara M. Hodges
Nipomo, California, United States
My husband and I live on the central coast of CA, We share our lives with two basset hounds, Ophelia and Hamlet, and a ginger cat, Wallace. I am a published author of 8 fiction titles.

Book One of the Daradawn series

Book Two of the Daradawn series

Book Three of the Daradawn series

A Spiral of Echoes